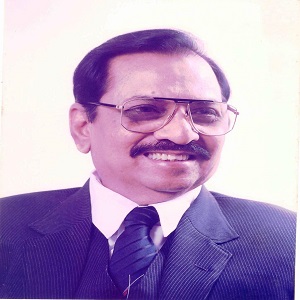 President of the Kongunadu Arts and Science College, Coimbatore

Dr. M. Aruchami, President of the College has been associated with the College ever since its inception in 1973. He is one of the Founder Members of the College and the Chief Architect of its eminent academic stature today. The College owes its present fame and the reputation to the academic and administrative acumen of Dr. M. Aruchami who has closely guided its growth and development.

He has served as a Fulbrighter at All India level under Indian Educational Administrators Programme by the Council for International Exchange of Scholars, Washington to study the pattern of higher education in USA visiting more than 21 Universities and community colleges in USA.

He has also visited various institutions and Universities in Japan, Singapore, Malaysia, Hong Kong, Thailand, USA, U.K., Italy and West Germany to study academic and governance practices. He has served as an active member in the National Institute of Educational Planning and Administration, New Delhi and organised many Seminars and Symposia at National and International Level.

He was awarded the "BEST PRINCIPAL AWARD" by the Government of Tamil Nadu and the 'SEVA RATNA AWARD 2003-2004' of the Centenarian Trust, Chennai.

He served as a Member in the working group constituted by the UGC for 11th Plan proposals in Higher Education, New Delhi

He was a Member of the State and UGC panels constituted for planning the "Education Reforms" in 11th Plan Proposals.

He served as a Member in the State Level Quality Assurance Co-ordination Committee.

He served as Syndicate and Senate member in Madras University and in Bharathiar University.

Was the Indian delegate of ISCA and attended the Sri Lankan Association for advanced Sciences held in Colombo, Sri Lanka.

Principal Investigator for the Collaborative Research Projects under PL480 Programme sponsored by United States Department of Agriculture and approved by the Indian Council for Agricultural Research.

He is currently on the Governing Board/s of many Autonomous and Non-Autonomous Colleges in the State. He is also the UGC Nominee in the Planning & Monitoring Board of Sri Venkateswara University, Tirupati. He has served as a Member of the Council and Committee of the Indian Science Congress Association. He has taken the initiative to open the new Chapter of the ISCA at Coimbatore and was nominated as its Convenor.

He is the longest serving President of the Association of Management of Private Colleges, Tamil Nadu, a post which he has continuously held from 1993. As President of the Association of Management of Private Colleges, he has championed the cause of academic innovation strongly and consistently by having a continuous dialogue with policy makers and regulators by offering solutions to the many challenges and critical requirements of our time. He has been in the forefront of social service by actively supporting and implementing the complete rehabilitation and development of villages. Under his inspirational leadership, the NSS students of the College have transformed the lives of hundreds of poor and destitute villagers by purchasing land for construction of houses, funding the construction of their homes, adopting villages and undertaking other community service programmes that have significantly improved the quality of life of the downtrodden villages. He has also made an important difference to the lives of a large number of students hailing from the rural and peasant communities by empowering them through his educational service.

He has helped the farming and peasant community to a great deal by enabling transfer of scientific skills and practices which have been validated by the Research done in the Science Departments of the College using a "lab-to-land" and "Earn while they Learn" approach. The peasant community have absorbed these scientific practices to improve their agricultural productivity and also increase their earning potential.

His planned approach to staff development has enabled the College to have a larger number of M.Phil and Ph.D holders among its faculty members. The sincere and dedicated service rendered by the Faculty Members under the guidance of Dr.M.Aruchami and with the magnificent support provided by the Management over four decades, the College was able to secure No.1 position with the NAAC rating of CGPA 3.80 out 4.00 aggregating to a percentage score of 95% among all Arts and Science Colleges in India in the year 2007.

He was instrumental in getting the status of "College with Potential for Excellence" awarded by UGC . He further propelled the institution to reach ahead and secure the prestigious “College of Excellence” award which only a select few colleges in Tamil Nadu have received from the UGC.

His public spirited contribution to charities and efforts to protect the value system and restore pride in India's culture and heritage deserves a special mention.