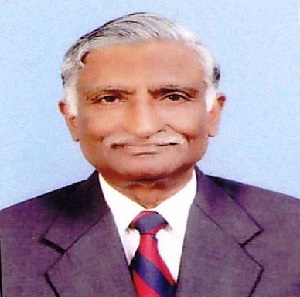 Er.Somasundaram is one of the Pillars of Kongunadu Arts and Science College. He has held various positions in the college, beginning as a council member in 1973; he scaled the ladder as Joint Secretary and as Vice President and as the President from 2012 to 2015. He is a man of strong and clear convictions endowed with keen sense of imagination and dedication. He is presently serving as President of Kongunadu Arts and Science College – Council, College Committee & Academic Council. His sharp Business and Educational Acumen has elevated the College to achieve the “College of Excellence” status by UGC and many more accolades in the near future.

He hails from Coimbatore and started his academic high schooling from Sri Ramakrishna Mission Vidyalaya High School (1946-1952) and entered his intermediate education at PSG Arts and College (1952-1954). He entered his professional graduation B.E Mechanical Engineering at Madras University (PSG College of Technology (1954-1958)) and later became the Fellow at Institution of Engineers (India). He is not only an Academician but also a Sportsperson. He has been the Captain of PSG Tech College Volley Ball Team (1957-1958) and his leadership skills has taken its root when he became the Chairman of PSG Tech Students’ Union (1957-1958).

Having gained his requisite knowledge and skill in academics he underwent a year of pruning his skills in PSG Industrial Institutes and joined M/s. Texmo Industries in 1960 and continued as its Chief Executive till 1978. He was responsible for the overall development and establishment of Texmo Brand Pump sets throughout India.

His innovative thirst drove him to establish M/s.Velumani Engineering Industry in 1962. The industry manufactured Starters, Switches and Grey Iron Casting.   Subsequently, Diesel Engines and Compressors were added to the production range. He also founded M/s.Rangavale Industries in 1973 as a second unit for manufacturing new range of Starters & Switches. At Present he is the Chairman Emeritus of Velumani & Rangavale Group of Companies and is continuing his services in Social, Educational, Medical & Professional fields.

His journey towards success optimized him through various roles and positions that he held moulding him to be a multi-skilled and multifaceted personality. His service to the medical field is highly noteworthy. He has been the Founder Trustee (1978-2016), Founder Treasurer (1978-2007), Hon. Secretary (2007-2012), Chairman & Managing Trustee  - (2012-2016) and Advisor – Admin (2016-2020) of Coimbatore Masonic Charity Trust & Coimbatore Masonic Medical Centre For Children. He is the Founder & Managing Trustee of Rangasivam Charity Trust (1980-2021). Founder Member, Vice President and Management Committee of Avinashilingam Jan Shikshan Sansthan(1984-2008).

Member: Management Committee, Sri Avinashilingam Water and Energy Training Institute and he was the Director of Coimbatore Cosmopolitan Club (1992-1995).

Above all his greatest possession and position is being the head of his family journeying hand in hand with his beloved wife Mrs.Valliammal and he is blessed with three Daughters, Six Grand Children and Six Great Grand Children.